Building a pond for water storage to water the garden, crops or even the house is great and don’t forget the countless recreation activities. 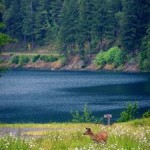 When WhatPond was built its main purpose was for water storage, swimming and adding fish to one day go fishing for the big one. As you have seen the pictures during the construction it is basically a bowl (see earlier posts). With all the sides being smooth and nothing else but wide open spaces.

After some thought we decided to put in a few large apple tree branches for the little fry and bait fish to hang out and not be eaten by the bigger fish until they have matured enough.

Why do we need structures for fish habitat?

Imagine taking a walk in the woods, your being quite so you can hear and see some of 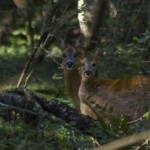 nature’s wildlife. Looking up in the trees after hearing squirrel, you see it only for a brief second as he jumps to another branch and disappears behind the tree. Then as soon as the squirrel came about there is a deer out in front of you, again a split second later the deer has vanished. But if you take this wildlife out to the desert … where can they hide? They can’t blend into their natural habitat and stick out like a sore thumb.

So back to the fish habitat in the pond, can you see the likeness now under the water’s surface? Having no habitat or structures is the same as the deer and squirrel being out in the desert. By adding habitat and structures for the fish to hide from predators and for the predators to ambush their prey we’ve created a little eco system of the food chain.

Habitat structures can be just about anything, like a Christmas tree weighted down by a cement block, milk crates, pipes bundled together, a pile of rocks and stack up 4 or 5 pallets and tie them together, float them out to your desired area and start adding cement blocks until the skids sink. You could also add the plastic snow fence around the pallets (skids) to make the access smaller to allow the smaller fish a chance to grow.

If you are building a new pond and have the time and money for the extra dirt work leave a mound of fill dirt then cut a trench through it with the backhoe, picture an upside down bowl cut in two pieces and separate them leaving a trench or ditch between the 2 halves of the bowl. Sort of creating your own reef  or honey hole.