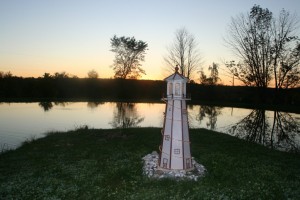 I’m sure you’ve seen the light house from time to time in different pictures or video that’s been posted throughout the site over the past couple years. A birthday present for the little women, one of her favorite pond accessories. It is pretty cool to have and saved me a lot of time and energy rather than building a gazebo out on the peninsula.  The light house came with a little 7 watt bulb that usually didn’t make it through one summer. So after a couple years I got tired of changing it so often and re-vamped the wiring and changed over to the compact florescent bulb of 13 watts, yep twice the wattage of the incandescent 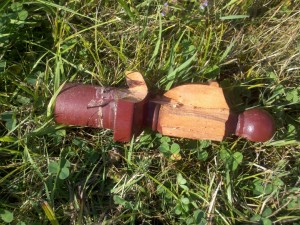 bulb but not noticeable in the electric bill. It has managed to work for one full year both summer and winter.

We also added a string of lights around the outside to light up the outside of the light house so it can be seen at night. By the way we do take the light house in for winter due to the crazy winters we get, but I do use the same bulb in a different outdoor fixture so I can see the pond area and wire it in a way to know the aerator is still running. 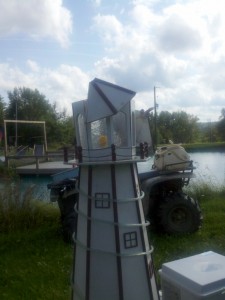 Oops I’m getting carried away typing so back to the story. We had warning of strong to severe thunderstorms the other night and never gave it a thought as most of them have been missing us. Guess what happened at 4:30 am ? Woke up to the lightning bolts and very loud thunder even heard a ka-bang as if it was right outside the window. Finally got back to sleep for a bit and pretty much was on the go the next day.

The following day we are at the pond doing some landscaping with rocks, sand and aquatic plants when my little women said WHAT HAPPENED TO THE LIGHTHOUSE? Obviously I didn’t do it. It actually got hit by lightning. Two large 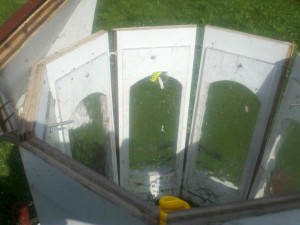 pieces of the top spindle were found in opposite directions 30 ‘each way and the roof blown in half. The outer walls that held the glass looked as if there was too much air pressure inside and split at every seem. Looks like a winter project. So much for the experiment on the florescent bulb, seems to be cooked.

When warnings come up, always listen to the forecaster’s. Lightning may not strike in the same spot twice but can strike anywhere any time. If you can hear thunder, lightning is close enough to strike. Seek shelter and play it safe. Better to be safe than ending up like the light house, or worse. 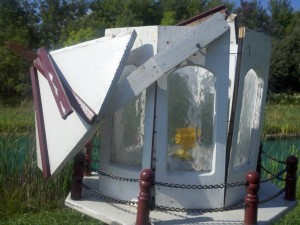 This is why we want to you GFI outlets for anything we put out doors and especially at or in the pond. Let the GFI blow up or trip out to safe your fountain and or aeration system. It is much cheaper to replace the outlet than to replace a motor.