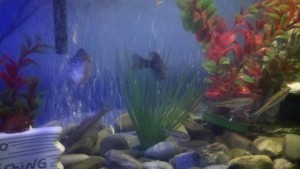 What happens to small fish under the ice. A couple years ago I was walking the pond, ok I walk around the pond everyday, it was late fall and cooling pretty quick. I noticed these little black darts shooting away from the pond edge, so I grabbed a butterfly net and caught a few only to find they were small Blue Gill. Thought that was pretty cool but winter is near and they won’t survive the long winter due to their size and body weight.

Winter came and stayed, no mid winter melt down. The pond iced over and plenty of snow to boot. Months later when spring came and the ice melted away we saw the poor little guys floating as the  ice melted. What a bummer!

What an experience and education over winter. We found that the Blue Gill are rather territorial and it didn’t matter what was in front of them…they would eat it because it was annoying them, in their way or in their seemingly personal space. Sort of like a dog if I don’t like it out it goes, the fish will gobble it up but spit it out if they don’t like it. 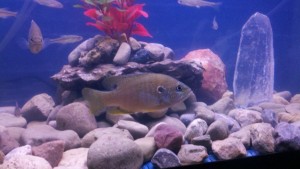 Then the fathead population started to dwindle, so we got another tank and separated them by size, not to mention I think the fatheads are kind of on the slow side. They seem to stay in a school but that’s it, they don’t try to hide and only run if pursued. A few times we caught one of the fatheads ramming the side of a Blue Gill.

Most of the time they were very entertaining, either chasing each other for dominance, food or their favorite spot to sleep. Yep fish sleep, I thought it was strange but they’ll find there spot, settle in and stay there till the lights go on or hear our foot steps. It was almost like the Blue Gill Nestled in their spot, whether it was on the bottom or other structure and basically sat there motionless.

Even after separating them by size the fatheads didn’t grow as fast as the Blue Gill and some more fatheads ended up dead, the BG’s tried to eat them but apparently a little too big. 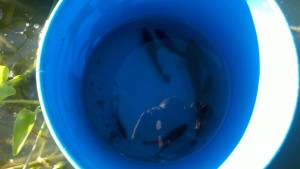 After spring arrived, the ice melted and the water warmed up a bit we transferred the BG’ back to the pond. Ideally when adding fish to the pond wait for the water to be up to 60 degrees for the little guys to adjust and acclimate to the water. From time to time over summer we’ve seen the little guys in the pond, maybe they we’re thinking it was supper time?

We won’t be trying to save the Blue Gill anymore and let nature take it’s course with them. They do multiply rather fast so no reason on trying to keep their numbers up at this point.