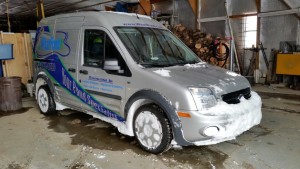 Plowing through drifts in the van.

What a winter again this year without much of an end in sight. At first I was hoping for a light winter as we have had in the past but after last year with the Polar Vortex making a couple rounds we are at least not that cold this year so far. Still dipping in the negative digits for the past couple weeks but coming up to single digits and low teens at times during the day.

The pond did freeze over once before Christmas and thawed out again, then by January 5 another storm hit and it’s been covered since, except for where the aerators are running to keep the docks from freezing or heaving because of the ice.

Snow fall had become a problem, not for the pond but for finding a place to pile it up, the drive is becoming narrower and the normal places to push snow are filled and creeping into the drive. Becoming annoyed? Yes a little bit since it is too cold to be out on the tractor pushing snow into the yard further.

So what’s all this have to do with the ponds? Comparing this year to last year the ice and snow developed much earlier and stayed on the pond into March. This year the ice really started to stay starting in the beginning of January so we have a month to month and a half this year with no ice and snow covering the pond, allowing the winds to help out with some surface aeration. Plants/weeds can still live and produce a little oxygen as well until they die from the ice and snow covered pond, turning into more nutrients and muck for next season. Don’t worry we do have a plan to help reverse the aging process of the pond with aeration and Beneficial Pond Bacteria.

Even though Punxsutawney Phil said 6 more weeks of winter we really don’t know how long it will last or how long the ice and snow will cover the pond. Which we have run into the past few years, ice on the pond and didn’t get the fountain in soon enough, but that doesn’t stop the Flying Manure Spreaders from coming to the pond and setting up camp. One year they even built a nest, had little goslings and now even more we have to keep diligent and deter them each year from setting up camp again. They are very persistent, come home from work and move their nest, the next day they have the same nest and the start of two more nests. Just keep up with moving their nests to help deter them. One big point to bring up is to have the pond cleaned up from all debris so they have less or no material to build their nest.

So hopefully winter does not last too much longer or at least warm up and get rid of the ice so all the ponds don’t lose fish like they did last year. Then wait for the water temperature to get up to help the fish get their immune systems back and have a fun pond season.

We are working on a few new products for 2015, from diffusers to water clarity and muck reduction. We’ll keep you posted.
If you haven’t already check out our free membership below for your E Books and Videos.