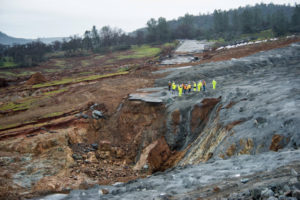 Earthen dam potential hazards. In case you missed it or haven’t seen the news about Oroville’s California tallest dam in the US of 770’ tall, has had some trying times this past weekend and continues with the threat of more rain. Oroville Dam history, quick video.

If you have been following along in our articles about building a pond there have been a couple to talk about removing water from the pond, which is one of the three main components of the pond.

It seems that everything was going fine releasing water from the rain and snow melt but the spillway ended up with, well some say there was a sink hole and it gave way, but looked more like a crack had form and the continued steady course of water opened the crack more and more until erosion took over and widened the crack to a huge hole and escaping to one side of the cement spillway and eroding along the outside of the cement spillway.

Part of the concern here is the erosion weakening the earthen dam structure if the erosion continues to creep back towards the dam. This video shows images of the hole in the spillway, a couple guys are standing in it so you get a really good perspective.


All the while the water is being removed from the dam the water still continues to dump into the lake. So much so that now the Emergency spillway is beginning to release water, then more and more water. So much water that now there is more erosion beginning along the emergency spillway, washed out a road and cut in deep crevasses’ as the water raced away from the dam.  Depending on which video or at what time in the video there Is a large parking lot the ends up flooding. From what I understand is the emergency spillway had not been used for 50 years.

With all the water racing out of the lake and over the dam somewhat controlled, the erosion  areas raised concern that something may and up letting go undermining the spillway or worse, over topping the dam. That’s when the decision was made to evacuate close to 200,000 folks. In this dam video you get a better overview of what happened before and after. It is a news channel but at least the video in not covered up with all the banners.

Oroville Dam repair work by the numbers Decent Article about what had happened, along with picture and video which help to bring it all together.

This was a very tense weekend for those involved with evacuating and those who had to make the tough decision of calling the evacuation and dealing with what is to come of the problems and clean up once some sort of control was in reach. Storms are in the forecast but the officials seem to believe the dam and spillway repair can handle it.

Even though this was a huge dam and lake in comparison to our small farm ponds, lessons can be learned and be sure we have the emergency spillway build correctly to handle what ever mother nature brings. Cement is a good tough material but as we have seen it can have problems.

As you can see the cement spillway that broke in Oroville Dam is more like our “down pipe” in the pond. Rain storms come in, the pond fills and is released out the pipe in a controlled manor. But if we get too much rain that the down pipe cannot handle, is when the emergency spillway comes into play. Size of the emergency spillway depends on the amount of water that could come into the pond.

Last thoughts on Oroville Dam is more rain coming but they have lowered the lake quite a bit for the incoming water from the watershed. The plan is all the rain adding water to  the lake will fill the lake back up to the point of the average depth the lake is normally at with room to spare for more. Concerns are, if the water needs to be removed will the spillway repairs be ready.