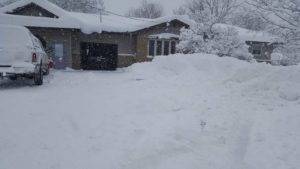 As the temperature drops below freezing we see snow instead of rain. The snow is pretty neat as it lands on the water it seems to just get swallowed up, sort of like magic. Over time as the snowflakes drop into the pond they cool the water and the air temperature cools the water until we start to see ice forming.

The ice continues to build as the temperature drops into the single digits, but as the snow builds up on the ice it insulates the ice from being able to build more ice.

This year we had a white Christmas 12/25/17 was the year for Erie to get dumped on around 3’ for on Christmas day and by that weekend we are close to six feet of snow fall.

The pond can handle it as the snow melts on the water, then the ice builds and the snow starts to stack up on the ice. It looks sort of scary looking at the pond you think the pond is losing water but the surrounding ground doesn’t melt the snow as quick as on the pond so it looks like the pond is low by 4’. 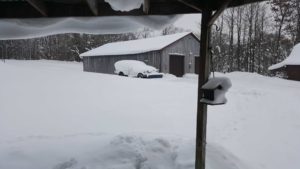 On the other hand or I should say on land we do have concern’s like our roofs, out buildings and no place to push snow if you didn’t start pushing it far enough off the drive to begin with. Trapped areas like in town have it worse as the parking lots shrink since the snow is taking up space until they haul it off in dump trucks to fields or parking lots that are not in use.

Back to the snow on your roof, if you have a lot of snow on your rooftop and it is accessible with a snow / roof rake, do make a SAFE effort to remove some of it.  Watch out for the electrical service to your home as you clear it.  Many of the older homes have garages with flat or low angle rolled roofing.  Those are obviously collecting a lot of snow.  Be sure to stay clear of any falling snow from the roof and don’t get on the roof until you have a lot of it cleared off. The added weight may take you down into the living room.

If you start to hear the framing in your house creaking, call for assistance and evacuate, as ongoing creaking is a warning sign that your roof is heavily stressed and bad things may be about to happen.

Back to the pond and all the snow that has fallen in it. With all the snow directly falling into the pond we can see some good water exchange a the snow will help push out the old water and leave some new water, sort of good and bad since we the snow is still like rain that drops in some of the nutrients and microscopic debris that can cause algae.

Further down the road, like spring or maybe a warm up mid winter we could see some flooding if the snow melts too quick or if we warm up and get rain. 6’ feet of snow is a lot of water running through your overflow pipes and even the emergency spillway. Same thing for the roof, if a warm up is too warm or we get rain, that snow will become extremely heavy.

Hopefully this little article has helped you understand what happens to the pond in winter, snow load on roofs. The latest is another 7-15” of snow by Tuesday, SO safe travels out there for New Years Eve.