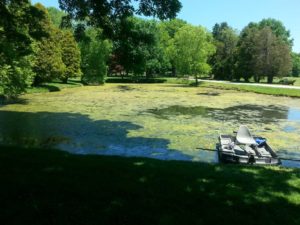 pond with coontail and algae

When we start to manage our first problem plant or weed and started to get it under control, the new open space (open water) allowed a new problem to come into our almost perfect pond. Not that it was added to the pond, possible but more likely an under lying problem that had already been there just waiting for the light of day since the first plant or weed had taken up all the available space.

For example let’s talk about this  ½ acre pond that got over looked for years and became a eye sore. The biggest problem was a fish kill that happened and the overall looks of the pond was a mess of plants and algae. 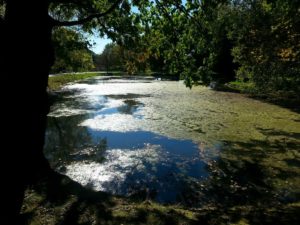 pond with coontail and algae half acre

on top of the weeds. The predominate weed was coontail, but there are other species of weeds sort of making the pond a salad of weeds. The other species are few so the main goal was to clear the surface of the pond so it looked better and folks could see the fish again.

Another problem we saw over time was folks had been dumping aquariums in the pond over the years which may have been the start of the coontail and other species of plants in the pond. Recently we saw what might be a pike, so dumping of fish has become a problem as well. 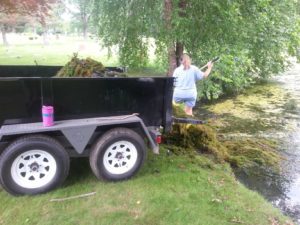 The start of the clean up was with the weed cutter and floating rake. Tossing the cuter out, attached to the rope then switching to the floating rake, pulling the cut coontail to shore and piling on the bank to pick up and discard via wheel barrel. As you would guess it was labor intensive. Another immediate finding was the years of muck build up coming out with the base of the plants we pulled out. Extremely smelly and black, black as used oil. Also need to mention the use of Tri Ploid Grass Carp. Which they had already added in the past and had us a more. They did seem to help but the plants had them out numbered. The fish lived well as they are about 4′ long.

The following year we purchased the Lake Mower to go on the boat which made the cutting much easier. Built an 8’ wide rake to push the cuttings to shore, using and using a pitch fork to get on shore or toss right into the 6 x 10 dump trailer and Ended up with four heaping loads from the pond. 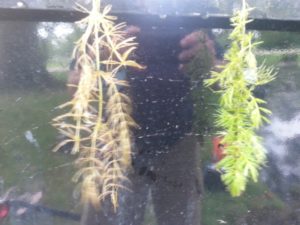 on the coontail could not grow there anymore. You see with the coontail on the surface or an plant for that matter the sun has a surface to penetrate and heats the water to very warm conditions which the algae loves to grow in those conditions.

Along with cutting the coontail we had installed two Lake Blankets under where the fountain is placed to help suppress the growth of the coontail. They do work to block sunlight and kill the plant, but at an average of 7’ deep the plant can grow from the sides and bloom over top the blankets almost making it look like they were not there to begin with. So every few months they need moved to continue suppressing the weeds.

So, for the past couple years we have manually cut and used the Lake Mower to keep up with the growing coontail. Along with a weekly dose of Beneficial Pond Bacteria to help consume the muck, dead decaying plants and leaves that fall in the pond each year. Pretty neat to see all the leaves and after about a month they disappear from the shore line using our Muck and Sludge Remover. 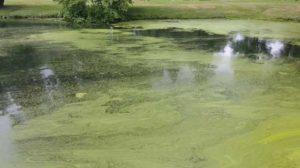 pond looked great, folks complimented the the owners and us when we are there working on the pond. One day we started seeing a funny looking film, kind of a scum from a distance. From the distance it looked like green paint on the water being pushed around with the wind. Upon closer look it turned out to be Water Meal. One of the toughest plants to get rid of and we’ll go into more detail on Water Meal in another writing.